In the spring of 2015, after a stay in a psychiatric ward, I was diagnosed with a psychotic disorder. For a long time, I struggled to accept my illness. I was ashamed of it. The very idea of talking about it to anyone was embarrassing to me as if having a mental illness made me guilty of something.

The biggest difficulty in acknowledging that I was suffering from psychosis was the idea that this couldn’t really happen to me. I kept saying to myself, “These are things that happen to other people. Things you read about on the Internet. There is absolutely nothing wrong with me.” But that wasn’t true.

When I was a teenager I dropped out of school, distanced myself from all my friends at the time, and began to live in a context of unreality in which I thought I was the victim of an executioner society that wanted to hurt me. This led me to grow in age, but for a long decade, it was as if the world had moved on without me following it. I was holed up in my room, feeling hatred towards the world, tachycardia, and fear if I had to talk or meet with anyone. I would tell myself the fairytale that it was okay, that I would choose it. But in reality, I was increasingly forced into a life that was limiting, oppressive, and full of delusional thoughts.

When I was admitted to the psychiatric ward I thought my life was over. I wanted to die. I didn’t feel alive anymore. I had the feeling that my life no longer had any meaning. I had been stripped of all my rights and believed I would never get through those weeks of suffering—mental and physical—again. Every day was a grueling struggle for survival. I felt misunderstood, by my family and by the psychiatrists themselves. I just wanted it all to end, or rather, to never have existed. I wanted to be a normal person.

Getting to the point of acceptance of what my life had been has taken years of inner analysis, of daily doubts about whether to stop or continue therapy, of conversations with friends that, fortunately, but very slowly, I returned to have after almost ten years of complete solitude.

What I lacked immediately after my psychiatric hospitalization was the ability to look at my life in perspective, from a different angle that could give me a better view of my problems. I realized, instead, that I had to understand my problems, discuss with and about them, and not keep them hidden for fear of others’ judgments. I realized only years later that my mental illness could be my strength. If at the time it was what sometimes brought me down, now, years after that hospitalization, I realize that it’s part of me. It’s my life partner. I’ve realized that in order to survive it and to live with it, I have to learn to talk to it, to not be afraid of it, even though sometimes it can be scary to know that you have demons in your head, wrestling with your own mental health and serenity. But I have come to the conclusion that I—we, who suffer from a mental illness—are not our illness. It’s up to us to choose how to deal with it because while we can no longer change our past, we can certainly move to build a better future for ourselves.

This is what my illness taught me today: have the courage to live your life to your fullest potential. Give yourself the time you need to recover from a negative period. Don’t force anything. Take care of yourself. It’s legitimate to be afraid of something that we can’t see, and that we may not yet fully understand. But we must not allow that fear to affect our lives completely.

I realized, above all, that people who suffer from a mental illness, are also among the bravest people you can meet. Thus, when I realized this, I “suddenly” started to feel better. 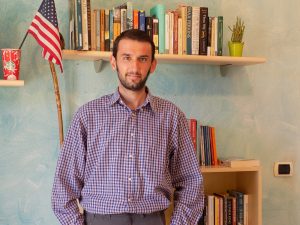 Tiziano Brignoli, 28, is an Italian writer, author of eight books on different genres. He suffers from a psychotic disorder, and lately, he started to speak out about mental illness, talking about his personal experience to help fight the stigma.