When I first became mentally unwell, I never thought I’d be here now, sharing my story—a survivor of my own minds torment.

I was 16 when I was first diagnosed with clinical depression. I was in such a dark place, scared of the thoughts in my head, scared of what people would say when they found out. I felt trapped in a never-ending nightmare.

As the years went by, I dipped in and out of depression, on and off medication, self-harm, self-medicating with alcohol to block out the internal pain. Unknowingly, making things so much worse for me.

In 2013, I had a serious mental breakdown. I spent nearly a year in psychosis. Completely disassociated with reality. I was living two lives: one real, one inside my head. But the one inside my head felt so real. I genuinely believed that was reality, and the rest was just a dream world in my head. I created a whole second life. People, places, events. Everything. That’s not the worst part. I dragged in so many close friends into it as well. They fully believed everything I’d told them was real. I will never forgive myself for that. The amount of hurt I caused, people I lost when the truth came out, and the loss of people’s trust are something I’ll never have back. People tell me I shouldn’t beat myself up about it as I was unwell. But I can’t help it. It’s always in the back of my mind. I don’t think it’ll ever really go away.

Most of 2013/14 I have no recollection of. Only what people have told me. I completely lost myself, and it took a long time for me to find myself again. On April 1st, 2014, I was diagnosed by a psychiatrist with Bipolar type I. At first, it hit me hard. But then, as I began to process it in my head, it all started to make sense. Things from the past even, I now have a reason for. It was almost like I was starting life all over again. Born again, rebuilding myself 1 bit at a time.

I’ve been on various different medication combinations; some were horrific with horrendous side effects, others did absolutely nothing. It took a long time to get it right, but even now, I have times when dosages need adjusting because it is not as effective as it normally was. For the most part, though, I’m stable. But that can change in the blink of an eye. Without warning usually. I can rapidly cycle for weeks on end, and it’s honestly like being on a never-ending roller coaster, with massive ups and crushing downs.

Thankfully, I have a really good support network around me. There’s always someone to turn to when needed. My wife is my rock. She’s seen me at my best and at my very worst. She’s been by my side through it all. Each battle we face together and come out stronger on the other side. We have a beautiful daughter, the perfect home, and an abundance of love. I’m proud of how far I have come, and even when it doesn’t feel like it, and I’m facing a difficult journey, I know that I’ll always come out the other side with my head held high. I’m thankful for every day I wake up and try my hardest to count my blessings rather than my troubles. Life isn’t always sunshine and rainbows, but the storm always passes, and the sun shines again.

My favorite quote will always be:
The devil whispered in my ear, you cannot withstand the storm. I turned to him and said, “I am the storm.”

Never give up, no matter how tough it gets. There’s always a brighter day just around the corner. Have faith and hope, believe in yourself, and keep fighting. You are worth it. It’s okay to not be okay. It’s also okay to ask for help. I see you. I hear you. Your feelings are real and valid. Never let anyone say otherwise!

Remember: This too shall pass.

36-year-old married mum of 1, from Cambridges 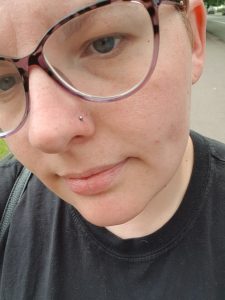