My story is not unique, unfortunately. So many young boys are brutalized by family members and go on to live in chasms of despair, confusion and self-hate unnecessarily. Silence is a killer. Victims must feel free to speak up without fear of reprisal or subjugation.

My abuse was at the hands of my father from the time I was six years old until 13 when my parents divorced. But the damage was already done and worse it had been allowed to exist by my mothers cooperation.

I was beaten and sexually assaulted daily by my father and served as his slave for seven years. His brutality ruined my life. I was conditioned to believe my lot in life was to sexually serve older males and happily absorb all physical and emotional abuse that resulted. Throughout my life I was and remain alone. I have never felt worthy of my rewards, accomplishments or victories. Each were simply a fleeting moment of elation quickly extinguished by my own self-disgust.

I have been married twice to disastrous results and sired one daughter. My entire family disowned me when my book “Slave, Slave, Freedom: A Personal Sojourn Through the Nightmare of Child Sexual Abuse and Recovery,” was published. I received only condemnation from them and my friends for airing the dirty laundry.

Post recovery I fell victim to scams and even veered from my wonderful faith. I fell for every tale and line of crap out of desperation for friendship. That is a mistake I quickly repaired. I have returned to my religious roots and moved out of the country to ensure those who led me down their path cannot influence me again. I survived yet again and have continued despite the ongoing struggles associated with recovery. I changed my name, address and telephone number to ensure privacy.

I have retired in Puerto Rico and life is only a bit better but better. I am writing “Fractured Freedom” a follow-up on “Slave, Slave, Freedom:…” which deals with how post therapy we are on an uncharted path and our tools acquired are certainly put to test.

I remain a loner; alone, sad and withdrawn, afraid of how others will react to me. But I am happier with myself and that is a huge accomplishment. Life would and could have been so much better if I had had support and loving protection from those in charge of my future. But, alas that was not to be. Now is different. I am in charge and I finally can supply the love and protection I so require.

Writing my book was the saving grace for me and it came as a result of the guidance and help from a brilliant therapist. I began therapy unable to look anyone in the eye and always wearing shades. I usually walked everywhere avoiding contact on the subways. She worked with me and allowed me to write in alternating journals and we discussed the weekly entries without me having to initiate the dialogue. Her approach was the only system that has ever worked for me.

I shudder to think what would have happened to me without her help. Like I said, I am much happier now and that is major.

Thank you for reading this.
Chuck 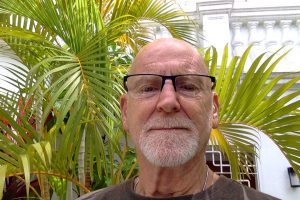 For over twenty-five years Chuck was involved in the entertainment industry from production to finance. Some of his featured clients were Danny DeVito, Bruce Willis, Brett Leonard, Mike McGlone, Gary Busey and Steve Harvey. His production credits include film, series TV, commercials and show openers. The formats were live action, visual effects, and animation.

He began his career at Cinema Products Corporation in West LA. There, under the supervision of Mordechai Avedon, he assembled and co-led the Steadicam production team that won an Academy Award for technical achievement.

Walt Disney Productions recruited him as a member of the line production team for the feature films Black Hole and Tron. His next assignment was EPCOT Center, reporting to Steve Bills, Director of Finance. As Senior Financial Systems Analyst in charge of the total production cost of the project, he incorporated his Industrial Engineering skills to bring the project back on track and open on time, October 2, 1982 and under budget.

After EPCOT, he moved to New York City joining Millimeter Magazine (The entertainment industry’s largest publication) as Controller/Director of Operations. During his tenure, revenues were higher than any other period in the history of the company. When Millimeter moved operations to LA, he elected to remain in NYC and returned to production.

He joined Doros Motion Studio, producing commercials and logos for Mattel, GTE, and others until he accepted a position with a two-sister company Jensen Communications and PCA Studio.

For Jensen he produced commercials for Citi Bank and Master Card. He developed long form children’s projects for PCA, two of which were optioned by GRAZ Entertainment in Los Angeles. With this deal he moved to LA.

A contract at L2 Entertainment in Santa Monica led to his position as Head of Production. He produced the pre-movie for Activision and Bruce Willis. Next he created the commercial division and produced an animated film with motion capture featuring Danny DeVito.

In ‘99 he joined Spike Entertainment Worldwide as COO/CFO and Executive Producer. There he produced Radio Free Sydney and Nike Dot Com, both for NIKE and the 2000 Olympics. His final project was Spike TV, a music video format, program, for Network of the World, UK.

In 2001 he returned to NYC, producing theatre, television and film. His award winning festival short, A Walk in the Dark, featured Mike McGlone (She’s The One, GEICO Commercials, The Brother’s McMullen) and Tercia Lynch (Macbeth in Manhattan, Regarding Henry, Off-Bwy: The Hank Williams Story) directed by Bruce Lucas.