I am 70 years old. My story won’t end stigmatization. It was around in the earlier years of my life and it is still around. It doesn’t bother me much ’cause I don’t wear a flag’. “Crazy” is not ‘who’ I am.

Schizophrenia is my diagnosis. In Canada, the disorder qualified me for a small monthly pension which began in my early 30’s. It enabled me to finally eat and sleep, indoors. For most of 4-5 years I was homeless (ages 26-31) but sometimes mercy had sheltered me.

My disorder probably began when the kid across the street tried to make me into his wife! He had pretended to be a friend. Someone had screwed up his head, and I was likely his first target. I was 3-4 years old. He coerced me to do things to or for him that I won’t mention here. Some readers might find it unpleasant. I know I do. That kid was a year or two older. Maybe two years. The time came when I was gonna to tell my Mom but I chose not to. I thought it would make my Dad upset. I suppressed it for a couple of decades. I, myself, didn’t, wouldn’t, remember it until after I talked to God, when I was 26.

Due to suicide attempts (pills, razor blades) and running away from home, I wound up with a psychiatrist. Words cannot describe his quietude and wonderfulness. I often had nearly nothing to say to him. I was a frozen soul.

By the end of high school, (1969) I got more serious about grades and got all ‘A”s for graduation. I also had played football. I won a trophy for the “Most Outstanding Boy of the Year”, was on the honor roll, and won the “most improved art student” award. Mom let me use her car and I drove to Colorado to see my girlfriend. She broke up with me ’cause she had another boyfriend. I had neglected to check before driving 2000 miles. My mental life began to spiral downward.

For about a month, though, I harkened to the murmurs of my heart and was in a Buddhist-like state. (Not a Buddha-like state… a Buddhist-like state.) Looking back I have determined that in spite of the ineffable grace of that time, still my heart was burdened and my aloneness was more than I could handle any longer. I chose to abandon my listening-hearing devotion, bought cigarettes and resumed socializing. ( I had been most silent for that month.) Soon potent drugs were part of my local hippie sub-culture and harmony gave way to a desperation. My beautiful and beloved girlfriend moved back but I rejected her… and myself… in the process.

I can see that the “word limit” is quickly rising so I will abbreviate my style. I used drugs in the summer of ’69’. I did not continue with school. I accidentally got a job at an art gallery and one day met Leonard Cohen, whose music had become a gospel to me. He bought my painting of him. I was amazed!

The next year I showed interest in an eastern Canadian university where art was taught. I went there in 1970 and became psychotic with a nervous breakdown. After a month at the nearest hospital, my sculpture teacher picked me up and drove me back to the school. The night before the January classes resumed, I took all of my medications but didn’t die. I got to class late and was very disoriented. Soon, I gave up and took a train home to Ottawa.

I was so afraid. Fearing was the platform of my mental-emotional crisis. Fear of death and fear of ultimate judgement: Hell. But the fearing was wide spread… most of reality was implicated and deemed dangerous. At home in Ottawa, I got a job (they pushed for it). I was a filing clerk – an office boy for five months. I couldn’t stand it. I quit and began buying diet pills: Dexedrine a form of amphetamine. Adolf Hitler used something similar. I used between one and two thousand of them. I lost weight and hair. I was pretty insane.

After about 3 months of this abuse, I saw Jesus. Soon, I saw God, a Formlessness, a Holiness, an Eternity that included me! I determined to seek God in a lasting way. After all, there is nothing like It!

By my mid-twenties I allowed God to exist in a direct, free, and personal way. I said, “God. You are God. Whatever it is that You will, whatever it is that You want, That’s what I want.” That is all I said, and nobody had put me up to it. I slept a thousand years in one night and I awoke ‘different’. There was peace and I knew it wasn’t temporary.

With God, I tried to resume life with my old girlfriend. I hitch-hiked, was stranded, went to a psych ward, was evicted, damaged my retinas looking defiantly at the sun. After terrible pedestrian challenges, my parents flew me across Canada and I saw ‘my girl’ briefly. Months upon months upon years, I was like a wastrel. I went to A.A. meetings because churches didn’t work… or speak truth.

One day a lady I knew said I could get on a disability pension because of my diagnosis. I did. I was able to do my art rather freely, at last! Two more decades passed and I became the pen pal of my eventual wife from Florida. We had both read Conversations with God , by Neale Walsch. We lived and loved until she had to ‘leave’ due to cancer in 2016.

I am, since then, into my art, NDE’s, channelers and meditation. I read contemporary books Jesus has channeled. I try to stay out of trouble. My very gifted and psychic friend reports of her many “visitors” whom include my wife and my 1960’s girlfriend! They are now friends, never having once met on this earthly side! I love them both! 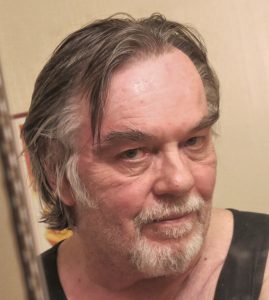 I am a Canadian man of 70 years. I make art and try to practice some degree of spirituality. I was diagnosed as schizophrenic decades ago and have not been undiagnosed. But I am o.k. I was born in 1950. Much of my bio is in my submission essay. I was married until my dear wife passed, but she gets in touch with me a lot though a local intuitive friend. I hope somehow to have presented a lot of my art work before my time comes. I don’t know how I will do this.