I want to say thank you for welcoming me into your hearts to open up about living with schizophrenia. That is not always the case – I have lost many friends simply by saying I am Schizophrenic, and though schizophrenia is not always the most talked about disorder, even in most Mental Health Awareness circles, you have always supported me, and that’s one of the main reasons I’ve been able to keep going, through the stigma and the censorship that still exists. So, I want to say thank you, I appreciate you, and I’m here for you.

The Unique Nature of Schizophrenia
By Allie Burke

I have written a lot about the whole You Don’t Look Schizophrenic thing. It is in fact a thing; I have spoken to other schizophrenics and they have told me that they get that comment from people a lot. And to this day, I still don’t know what that means. If I had to guess what people mean when they say that, I guess I look too well-adjusted, too normal, to be schizophrenic? When people in my life started learning that I had this disorder, I actually had someone come up to me and say, “I heard you’re schizophrenic. I never would have guessed in a million years that you were.” I probably should have asked why. I’ve grown a lot since then and am teaching myself to ask more questions and educate people rather than writing it off because it is harder to confront people. But it is still very confusing to me. I don’t know what a schizophrenic person is supposed to look like, in the eyes of these people who don’t think I look schizophrenic. I don’t know if like my hair is supposed to be messy or if I’m not supposed to wear makeup? I mean, I’m not ignorant enough to not know that many people without homes and resources have this disorder, but that doesn’t mean that is the situation of all schizophrenics. That is a stereotype; a stigma. That people living with schizophrenia are all the same. I work a full-time job (two, or three, if you count Stigma Fighters and all my other projects, which you should) and I have a home and the resources to live a life that makes me happy and gives me fulfillment. Not everyone with this disorder does; I recognize that and do what I can to improve the situation for those people, and I don’t look down or place shame on anyone who is without these things, but I think that when we are talking about schizophrenia awareness it is very important to recognize that like many other mental illnesses, this disorder affects most everyone differently. I know this because I talk to others with the disorder and though we have some things in common, many of our symptoms and experiences differ. 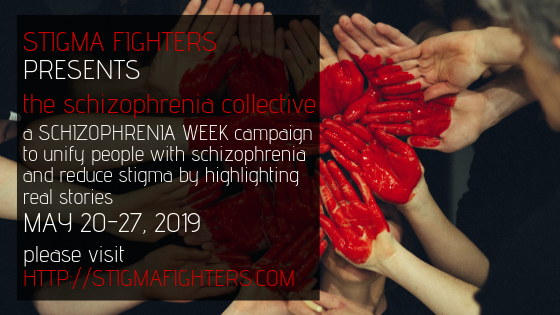 I think if there was one request I could make of society during Schizophrenia Awareness Week, it would be to stop saying things like “You don’t look schizophrenic,” or “You don’t seem to be struggling so your schizophrenia must not be that bad,” or “You did this bad thing so you must be schizophrenic.” Let’s please try to recognize that each person living with this disorder has many different roads and we are not all driving on the same one. We are in different parts of our lives, we have different backgrounds, we have different experiences. We are people. Just like any other person I am unique, and just because I don’t look like some other schizophrenic you met or saw on TV, doesn’t mean I’m not going through something. You know that thing they say, be kind because you never know what someone is going through? Schizophrenia is very much like that. I may work full-time and someone else with schizophrenia may not, but that doesn’t make one of us better, worse, happier, more successful, or otherwise. We all do what we can, and we all look schizophrenic, because schizophrenia is not a thing you decide someone has or doesn’t have when you look at them. Let’s stop profiling people. I promise you that this disorder does not discriminate. It affects many different people in many different ways. 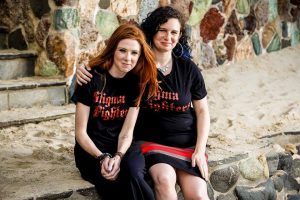