In 2012 I put a gun to my chest and pulled the trigger. That was when I realized that I had a problem. For years I’ve suffered with severe depression, bipolar disorder, and drug/alcohol addiction. As a queer non-binary man living in the South I had always had issues with self love, body image, confidence, and acceptance. In 2018 I relapsed which caused a major mental breakdown. My last day of using drugs I was driving home, nodded off at the wheel, flipped my car multiple times, and ended up in a deep ravine. Upon waking up I was angry. Angry that I was still alive. Within the span of two months I totaled six vehicles, lost my job, lost my home, and was arrested four times on drug related charges. I was ready to die, and I had embraced it. During my relapse, and even after I began recovery, I still wanted to die. I was exhausted. Tired of fighting, tired of searching for hope, completely defeated, and broken. I had stopped eating and lost almost 50lbs in about three months, and I had given up. At some point in my recovery I surrendered. I admitted to myself that I couldn’t do this alone, and in all of my wrecks and two suicide attempts I was still here. There had to be a reason. I had a purpose, although I didn’t know what it was just yet. Five months into my recovery I stopped embracing death and began to embrace life. I developed a daily routine which included meditation, yoga, medication, music, self care, positive affirmations, and journaling. Slowly I returned to my old self again and had finally found a small bit of the happiness I once had. I’ve always been open and transparent about my struggle with mental health issues, but had never really discussed my addiction and suicide attempt. It was time for that to change. I had to give my story a purpose, and I had to use my journey as the foundation of helping others, which in turned helped me. I felt that everything I had gone through had happened for no reason, but once I started to use my story I realized that I had gone through those things because I was strong enough to survive them. My story has molded me into the person I am today. I now run my own business as a spiritual coach/tarot reader/holistic healer, and I use my platform to be a loud and proud advocate for mental health awareness, suicide prevention, and addiction education. I live each day to the fullest and I’m truly happy for the first time in a long time. I share my story with the hope of helping others, and letting them know that they’re not alone during their battles. I use my knowledge and experience to help others develop and implement a daily routine. I teach people about the Law of Attraction and the power of our words. I help people shift their perspective and change their mindset, but most importantly I help people escape from the dark hole of depression, suicidal thoughts, and misery. I am incredibly grateful for the things I’ve gone through, but it took a long time to get to that point. I would change my past for it has created my present and is shaping my future. A huge part of my recovery is sharing with others how I’ve managed to successfully fight my mental health issues, but also to educate people on mental health. The negative stigma of mental health issues will never get better unless we talk about it. For the first time in my life I am happy, healthy, and love the person I see in the mirror. That didn’t come without challenges and a lot of hard work, but it has all been worth it. You are not alone in this struggle and there is hope. The storm won’t last forever and eventually the sun will shine again. It’s important to not let your journey defeat you, but instead to use it as an opportunity for growth and building strength. I learned that things often have to fall apart so that they can fall together. Sometimes we have to completely demolish, and sometimes lose everything, so that we can rebuild a much stronger foundation on which to put together a happy and successful life. There are still difficult days, but I remind myself that I had more strength than I realize and that I’ve survived every single battle so far. Every day is just another step on becoming a better person, and today I’m excited for that journey. I look forward to what life has to offer and I proudly tell my story because it’s a huge part of who I am. Things will eventually get better. Keep fighting. I believe in you. 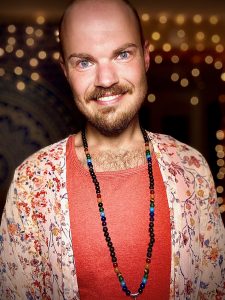 Chase is a 30 year old queer hippie living in the Bible Belt of the south. He had struggled with mental health issues for years and survived a suicide attempt. He is also a recovering drug addict, and now runs his own business as a spiritual coach and holistic healer. Chase once welcomed death, but now he embraces life.