There were three major things that happened that affected me in negative ways in my childhood. I was diagnosed with Executive Dysfunction Disorder. What that means is that I have a hard time doing many tasks others find easy. A family member had severe anger issues that came out in horrible ways. My mom had mental health issues of her own. At one point she had taken the collective contents of all of the pill bottles in an effort to commit suicide. In sixth grade, I ended up in an outpatient program because of my clinical depression. I started weekly therapy and began taking antidepressants for the first time.

I attempted to go to college. I thought that by moving out, I could leave my mental illness behind. I completely neglected my psychological health. I wanted everyone to think I was fine. I lied to my therapist and told her everything was going swimmingly. In reality, I was barely functioning. I had a difficult time getting out of bed every morning. There was a night that there was a fire drill. I wasn’t aware that it was a drill and thought it was an actual fire. I didn’t make an attempt to get out of bed. I remember thinking that asphyxiation or burning to death would be an awful way to go, but at least it would be over with. I was insufferable and my roommate couldn’t stand living with me. I stopped going to classes altogether and flunked out my first semester.

After returning home, I moved back in with my mom. I had what I consider my first manic episode. I was acting erratically and making horrible decisions. I wasn’t sleeping more than a couple hours a night. These are all signs that my mental illness is out of control. I wasn’t aware enough yet to realize something was wrong.

One night, I made the decision to go see a friend despite having only two hours of sleep. I didn’t think about the potential consequences of my actions. I fell asleep behind the wheel, and nearly killed someone. I was diagnosed with PTSD.

After recuperating from my final surgery, I was out of pain for the first time in nearly a year. I began thinking I wasn’t real because there was no pain. In my head, the only way to prove to myself that I was real was to see blood. I began harming myself on a daily basis. A friend found me with a knife in my hand and helped me to get the assistance that I needed. I was put into an outpatient program at the local psychiatric hospital. My medications were changed around, and I started extensive therapy. I learned by reassuring myself I was real over and over, it curbed my need to see blood.

In my mid-twenties, I began seeing a new psychiatrist who diagnosed me with a cognitive disorder. I finally had a name for what had always been wrong with me. It explains why I have always had a hard time doing tasks others find easy. I now know why I’ve never been able to keep a job long-term. Becoming distracted very easily now makes sense. It also explains why I have such a hard time learning certain things. I have always been impulsive and make bad decisions, sometimes putting myself in danger. I know the reason for that now. It is also the reason that I have been in five bad car accidents that were all my fault. The doctor told me I couldn’t drive anymore because I was a danger to myself and others. I work around that by using the bus system or walking when somewhere is close enough.

I had a really hard time accepting that my brain works differently than others. Then I realized that my diagnosis is part of me, not what defines me. I have learned to ask for help, something I always had problems with. I thought it made me weak, but it doesn’t.
In the past, a doctor told me that my brain never developed past a thirteen-year-old. People began labeling me, and worse I labeled myself. Then I realized that labels belong on files and not those described within them.

In the summer of 2016, I began having self-harming thoughts. I saw a doctor who admitted to having zero experience with psychiatric medicine. After multiple medication changes, I went from occasional thoughts about harming to having them 24/7. I even dreamed about it. Anxiety completely took over my life. I went to the emergency room multiple times hoping to be admitted to the psychiatric ward. Each time I was turned away, even after the urges became too much and I hurt myself.

I saw a psychiatrist eventually, who helped me figure out my medications. The self-harming thoughts began coming less often, then finally stopped.

In early November of 2019, I went into a bad depression. It came on suddenly, with no cause. I was constantly sad and anxious. I became moody and angry. I had no interest in any of my favorite activities. I couldn’t concentrate on anything for an extended period of time. For most things my limit was about twenty minutes. I had a feeling that it was one of my medications. I had been on it before, and it had stopped working for me that time. I saw my psychiatrist, who did a med change. I had a lot of physical and emotional side effects.

I began feeling more like myself again right around when the self-quarantine started. I am constantly looking for new things to put into my recovery toolbox to keep myself well.

Depression is something that I will deal with for the rest of my life, but now I know that it’s manageable using the tools that I have learned I am aware that life will throw more challenges my way, but life is full of challenges for everyone. 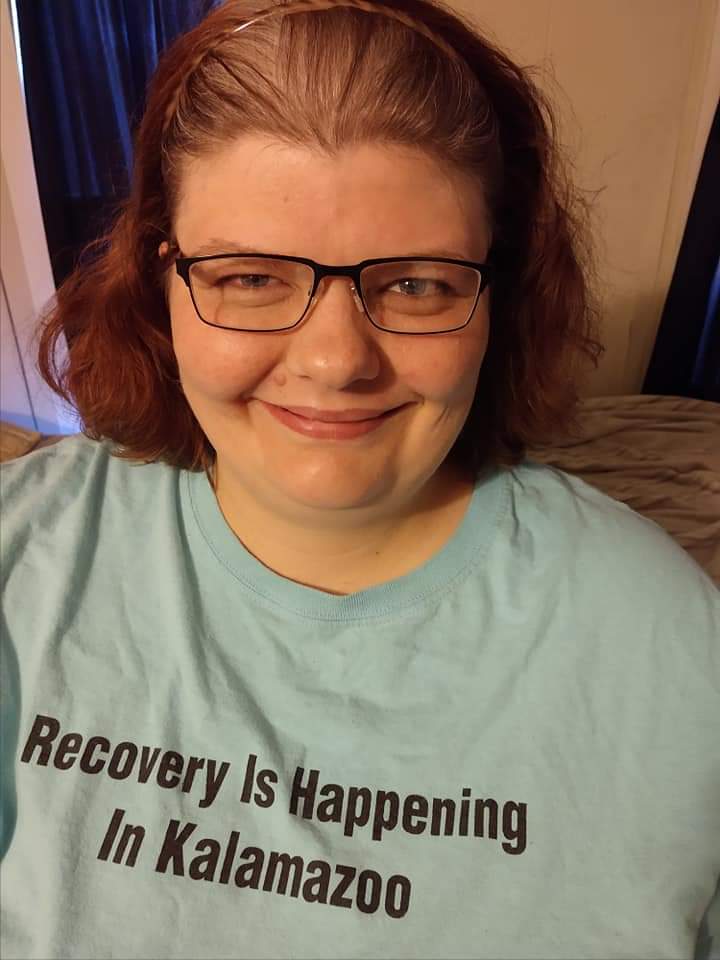 Monica was diagnosed with clinical depression at 13, and since then has been diagnosed with generalized anxiety disorder, PTSD, as well as borderline personality disorder. She lives with her husband and two dogs, and works as a public speaker educating people about living with mental illness.