It was November and traffic was awful. A downpour had turned the freeway into one long hydroplane. Even if I hadn’t been sobbing, visibility was almost nil. My two children were strapped in their car seats behind me. Both were screaming, the three-year-old punctuating every shriek with a kick to the back of my seat. Meanwhile, the baby wailed with hunger, making my breasts ache.

As the freeway crossed a river, I kept drifting toward the edge of the road. It wasn’t the wet pavement that was affecting my car. It was me, intentionally pulling to the right. I felt exhausted, defeated, and convinced the tantrums would never end. In that moment, I wanted nothing more than to drive over the banks of the river and into the icy water.

It was a familiar feeling. Even before having children, I’d dabbled with the idea of ending it all. I’d spent the last eight years battling suicidal thoughts and major depression, but I’d never made an attempt at suicide. My fatalistic thinking was a well-worn path toward a destination I didn’t particularly want to visit. That afternoon, I gripped the wheel, corrected my course, and tried to ignore the siren call of suicide.

As I drove the remaining length of the bridge and into safety, a thought occurred to me, and not for the first time.

Maybe becoming a mom was a mistake.
***
Deciding to have children hadn’t been an easy choice for me. I’d wrestled with idea of parenthood for five years before getting pregnant. My reluctance surprised me. Kids had always been a big part of my life plan. When I was a little girl, if people asked me what I wanted to be, I never hesitated. “I want to be a mommy!” I’d exclaim, clutching a baby doll to my chest. Career Woman Barbie, on the other hand, got fed to the dog. Ten years later, a health class assignment found me gluing dozens of babies on a poster board titled, “My Goals.” I knew what I wanted my future to hold: kids and lots of them.

Then severe depression hit when I turned 22. Suddenly the large family I dreamed of seemed ill fitting and terrifying. Part of it was a fear of failure. I wasn’t sure I could be a good parent. I knew the statistics about children with mentally ill parents. They’re more likely to be maltreated, have attachment issues, or develop mental illnesses of their own. Damaged as I was, I didn’t want to break anyone else.

But the real reason I feared having kids was this: I thought motherhood might kill me.

I’d spent the last few years feeling used up, hollowed out, and walking the on edge of madness. Through therapy and meds, I stabilized. But I feared having a baby would leave me teetering on the same ledge I’d just stepped down from. Motherhood would be non-stop care of another human being. I would have to give myself – my time, my body – to another person in ways I couldn’t fathom. What’s more, parenthood was a permanent gig. There would be no switching jobs or leaving town if things went wrong.

After two years of relative sanity, I decided it was worth the risk. Now that I wasn’t just holding on from day to day, I realized I wanted my life to be about more than just surviving. I’d been letting my illness define me and make my choices for me. And while there was brokenness in me, there was also love – love that would help me become the kind of parent I wanted to be.
***
I’ve been a mom for five years now and honestly, I was right to be scared.

Motherhood is the hardest thing I’ve ever faced. I haven’t slept more than three hours at a time since 2011. My alone time consists of potty breaks while my son sobs behind the bathroom door. Every day brings another argument about the shape of food, the need for pants, or a thousand other ridiculous things. I have yelled more and cried more during these years than any other time in my life.
I’ve also lost more of myself than I expected. Some of the hobbies that kept me sane – rock climbing, reading, running – have been shoved into the cracks of my life or abandoned altogether. Instead, I do dishes, fold laundry, and break up fights while praying for the day my kids don’t need me so damn much.

Between the sleep deprivation, the fighting, and the incessant demands of my tiny tyrants, sometimes it feels like my life is one constant depression trigger. Doctors have doubled my medication since that rainy day on the overpass. I see a therapist weekly. But there are still days I barely make it. I hold myself together with safety pins and Elmer’s Glue and pray I make it till bedtime. I’ve never had to battle so hard to stay sane.

I’ve never had so many reasons to fight this battle to stay alive. I’ve never had so many people to cuddle me when I’m sad or hold my hand when I cry. I’ve never been more loved and I’ve never loved more.
As hard as it is to live with my children, I never want to leave them. When the darkness comes to claim me, games of peekaboo, sticky kisses, and toddler dance parties shine like rainbows in my gray life. On days when I struggle, days when pill bottles and pointy things call me to give it up, I look at my children. I look at my children and I stay. I keep breathing in and out – sometimes in hysterical sobs when I can’t face it anymore – and I do the best I can. Maybe it’s not good enough today. Maybe the safety pins break and the Elmer’s glue smears and I end up crying in a closet.

But no matter what, I stay. Because I was right – there is more love in this life I’ve chosen than there is brokenness. 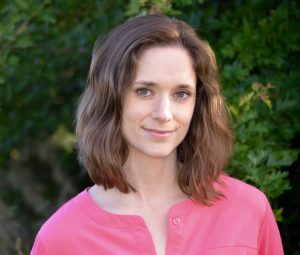 Jessica Hernandez is an author and mother of three. Her debut picture book, FIRST DAY OF UNICORN SCHOOL, illustrated by Mariano Epelbaum, came out January 1, 2021 from Capstone.

Other publishing credits include essays in Skirt! Magazine, Parent.co, and Psych Meds and Sammiches. She also won the 2016 Pacific Northwest Writers’ Association Literary contest for memoir and nonfiction.