My name is Alex. I’ve been diagnosed with a moderate level of depression and anxiety, and all my life, I’ve wondered why I was living. I constantly questioned my own morals, every action I took, and the universe itself. I even quit my religion, because I believe no perfect God would let their creations suffer so much. I looked around me and saw hopelessness- a global pandemic, racism against Asian-Americans like myself, etc. Now, I was suicidal- and I suppose I still wouldn’t exactly care too much if I was run over by a bus tomorrow- but thanks to the efforts of my family, friends, and some wonderful healthcare workers, I can muster up a few reasons for living. I’m not cured, I still feel awful some days, and I’ve lost my fear of death, but I’m willing to give life a shot.

Now imagine a person who has it worse than me.

I’ll refer to her as “Lily”- she’s my girlfriend, and we’ve been together for a year. But it wasn’t always like that.

Lily is a wonderful person. She’s 16, and like me, she’s Asian-American. She has been diagnosed with depression. She used to love playing music and exercising, and taking naps after a day of hard work. Now, her parents have certain cultural expectations of her- of course, she’s expected to do well in school, she’s expected to go to college and be successful… and she’s expected to be “normal”.

Lily’s parents didn’t even acknowledge her depression at first. Her suicide attempt and the fact that she had been inflicting harm on herself with a knife led to her being sent to the hospital in middle school, and being given medication. However, her parents didn’t want to believe that she was depressed. For a while, they argued with the therapist, and prevented Lily from taking her medicine. Now, let me tell you, I’ve SEEN Lily without her medicine. She looks dead. Lifeless. She can barely gather the willpower to speak or stand. She can’t focus on anything, not even when she’s with me. I’m sure her parents had their reasons for thinking that depression was a liability, but in my eyes, her parents almost killed her. Imagine that- being murdered by your own parents.

It’s better nowadays- her condition is stable, she takes her medicine, and her parents stay out of her way- but they don’t support her. That’s painful. With nobody to support me, I would have died. But my parents were supportive, and still are today- they support my decision to change my religion, they accept that I have some symptoms of depression that I need a therapist for. But Lily? Her family doesn’t even acknowledge her symptoms. They go on trips and drag her around everywhere when all she has the willpower to do is stay home. They regularly search her room when what she needs is her own space to feel comfortable. It’s gotten to the point where she gets scared at her parent’s footsteps- she can’t be comfortable in her own home. And it’s not like they’re abusing her or anything. They’re just being a bit ignorant- but that ignorance can cost lives.

Look, I’m just a high schooler. I’m no saint. But I’m the only person who Lily can rely on besides her therapist for her support. I like to think that I’m a good boyfriend. But well-meaning people like me simply aren’t a replacement for an entire, loving, supportive family. Lily wants to change her religion, too, you know- but she’s too scared to tell her parents about it. I can’t help her at all, and neither can anyone else- her parents won’t change, no matter what she or her therapist does.

What can you do to help? Well, just be mindful of us. 1 in 5 people are depressed. However, also remember- we’re people too. We just need to take pills to keep our hopes up. Lily and I are high school students, you know. We might even go to YOUR school, who knows? So, acknowledge the pain that people feel, do what you can to support them, and know that you’re making a small difference. And one day, when you have kids? Acknowledge them for who they are- no matter what they are. 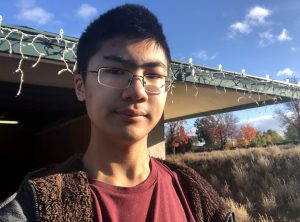 Alexander Lim is a high school junior who lives in California- he likes making videogames, writing books, and philosophizing about life. He has a loving family, goes to a great school, and has a beautiful girlfriend- although at times he feels down in the dumps, he still feels that he is lucky, and wants to make it so that others feel a bit better.